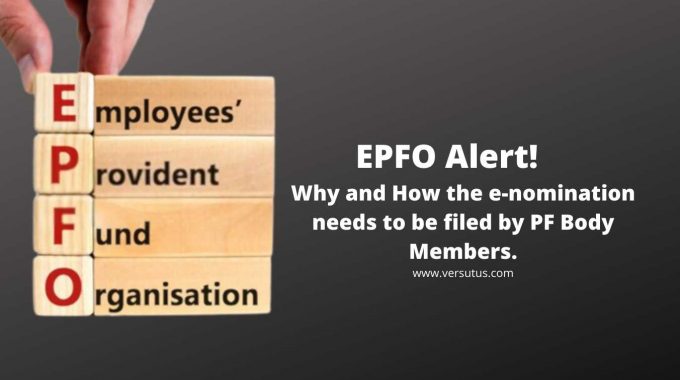 The Employee provident fund (EPF) is a government-backed Retirement Benefits Scheme for the salaried members which is maintained by the Employees Provident Fund Organization (EPFO).

On a recent notice, EPFO mentioned why it is important to file an e-nomination. It stated for one to have the funds available from PF and insurance benefits in a timely manner or in an unfortunate scenario on a member’s sudden demise, the member nominated can be ensured to have the settlement in a seamless manner.

Who are entitled for e-nomination

How to file the E-Nomination

Now, in order to file e-nomination, the EPFO members have to follow some simple steps, as follows:

Step 2: Then one has to go login with UAN and password

Step 3: Now, one has to select ‘E-nomination’ under ‘ Manage Tab’

Step 4: Next ‘Provide Details’ tab will appear on the screen and one has to click on ‘Save’

Step 5: One has to click on ‘Yes’ to update the family declaration

Step 6: After this, one has to click ‘Add Family Details’. It has to be noted that more than one nominee can be added.

Step 8: Finally, one has to click on ‘E-sign’ to generate OTP and submit the OTP on a mobile number linked with Aadhaar

A seasoned professional with more than 2 decades of experience in collectively working with various ministries of the Government and well networked amongst various Government departments and the officials in various sectors. With the urge to streamline processes for organizations founded Versutus management services Private Limited, an organization growing tremendously in the fields of manufacturing, logistics, Warehousing, IT & ITES which are a few of their expanding services. The confidence and trust of their clientele speaks volumes about "Versutus" under the leadership of "Ramji".

Are CFOs updated with the demands of upgraded functional structures? – Versutus perspective

Has today's finance made it mandatory for the CFOs to rethink their traditional approach? How…

DUE DILIGENCE – THROUGH A CORPORATE’S EYE.

What is due diligence? An investigation, audit, or review is performed to confirm compliance with…