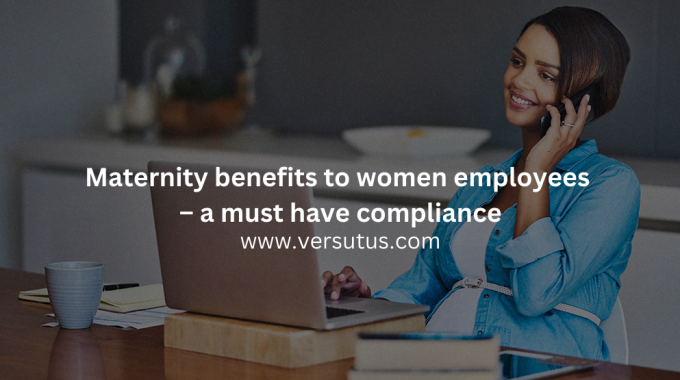 The birth of a child marks a major step in the life of a woman. Over the years, little has been
done to provide women employees support by providing maternity benefits. It’s vastly
realised and understood that women are forced to quit jobs and everyone thinks this is
normal. Recently the government has taken measures to support the role of new working
mothers in the country and decided to draft maternity leave rules. The government has
introduced the Maternity Benefit Act in the Rajya Sabha, that has increased the number of
leaves for pregnant women to 26 weeks, which was previously a mere 12 weeks. The move
comes across as a major relief and helps retain women employees.

It is significant for woman employees to know the advantages they can benefit from and the
rights under the law.

Assist in tiding over – gender inequality

One of the major benefits of providing maternity benefits to women at their workplace is the
fact that not does it feel encouraging in increased women employment, but also helps to
reduce the gender bias, where in India as such we have very less number of women who
work in organisations as against way number of men in any department of various

organisations. Along with helping to retain women employment, the Maternity Benefit Act
also helps to encourage women to leave the comfort of their homes and pursue a
professional career, thus being independant.

It has been a practice where women are expected to quit jobs at the earliest signs of
pregnancy. Recently, the Indian government has taken initiatives to consider women’s jobs
to include everything other than that of taking care of the family. As a society we are more
accepting of working women now, by providing women with employee benefits such as
relaxing the maternity leave rules, the number of women forced to quit jobs has also been
reducing significantly.

With the government having introduced an amendment to the Maternity Benefit Act, there
are reports of employers laying off women employees, which also saw a major drop in the
number of women being hired, following the government’s move. To manage this , the
government has planned a few more measures, which are still in the pipeline, in order to
discourage such practices and to provide women with a level playing field to their male
counterparts. Despite the delayed move to help retain women employees, there is now hope.

The amendments to the rules are as follows

Having said all of this and being better late than never, the government and the legislatures have taken steps to support women in working environment and the tasks henceforth lies in the organisations talking it up to initiate and have steps to induct more women and support their work environment and follow the compliances to taking it all seriously.

A seasoned professional with more than 2 decades of experience in collectively working with various ministries of the Government and well networked amongst various Government departments and the officials in various sectors. With the urge to streamline processes for organisations founded Versutus management services Private Limited, an organisation growing tremendously in the fields of compliance and management services with its clientele across manufacturing, logistics, Warehousing, IT & ITES. The confidence and trust of their clientele speak volumes about "Versutus" under the leadership of "Ramji"

Emerging trends for HR in 2023

Environment resposibility – a must for businesses

Under the Environmental Responsibility of the Corporates, it is expected to operate in amanner that…

Outsourcing business activities has been a popular strategy for quite some time now. With the…