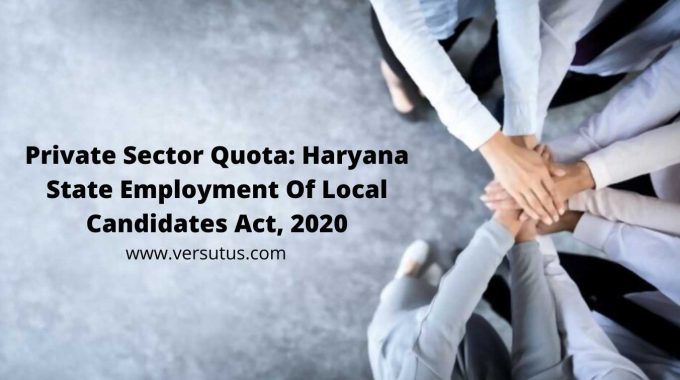 The Government of Haryana has notified earlier in order to create more job opportunities for the local youth in the private sector, the assembly recently passed the bill on November 06, 2021, which will come to effect on Jan 15, 2022, under Haryana State Employment of local candidates act, 2020 stating the private sector to reserve 75% of the jobs that offer less than the monthly salary of 30,000 INR for individuals who are domiciled in Haryana.

The Act applies to all private companies, societies, partnership firms, trusts, and any person employing 10 or more persons in Haryana. The Act will only have effect for 10 years from the date of its commencement.

The law also states that start-ups, companies, firms, and establishments which come into being or are set up after January 15 will be exempted for two years from hiring 75% local candidates by the state government.

The supreme court has upheld the notification to find the complete details on the same and the government Gazzetta notification, visit the link given below:

Are CFOs updated with the demands of upgraded functional structures? – Versutus perspective

Has today's finance made it mandatory for the CFOs to rethink their traditional approach? How…

DUE DILIGENCE – THROUGH A CORPORATE’S EYE.

What is due diligence? An investigation, audit, or review is performed to confirm compliance with…